Buttoning up the Garden

Slowly over the last couple of weeks we have been getting ready for winter in the garden.  Garlic was sown, strawberry runners were transplanted into the kitchen garden in hopes of actually being able to eat some before the critters do next year, and the lowbush blueberries were also transferred over into the raised beds (which they share with strawberries).  We will cage and net fruit in the raised beds next year. (The three beds pictured below house garlic, strawberries, dahlias, chard, and lowbush blueberries.  The dahlia tubers will be dug for winter after a killing frost.) 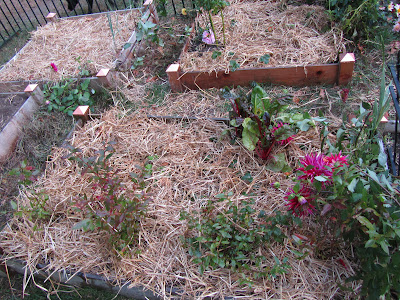 We also ripped out the tomatoes and planted the two new apple trees.  Limb cuttings stake the whips, which will be pruned into a double horizontal espalier next year.  We will add in a new bed or two and expand the fencing by spring in attempt to compensate for all the kitchen garden square footage being dedicated to fruit production for 2011.  I may not get full sun in any new beds, but greens will tolerate those conditions so one way or another it will all work out.....I will greatly miss "tomato alley".  It is now "apple alley", with some grow space for shorter crops on either side of the trees.


BEFORE: A newly constructed, newly planted 'tomato alley' back in May of this year: 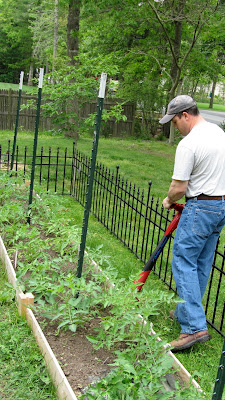 AFTER: The newly transformed "apple alley" (with some newly propagated red and black raspberry canes heeled in for winter): 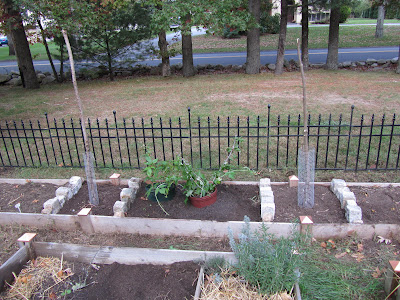 We had no choice but to enclose the new apples after learning the hard way this year that one of my dogs likes to eat baby apples off trees.  Sigh, she also likes blueberries and strawberries.   The new location will keep away the canine bandit, leaving us with all of winter to come up with a plan to keep away the rodent, bird, and bug bandits as well.  The raspberries were propagated by sticking growing tips into grow-bags of compost this summer after the potatoes were harvested.  They rooted like crazy and surely didn't appreciate being torn up and out today....fingers crossed I didn't do irreparable damage moving them out of the grow-bags and into containers to bury for winter.

The coldframe was erected, and the greens were hooped and covered today as well.  Here is a side, and bird's eye view of the fall garden: 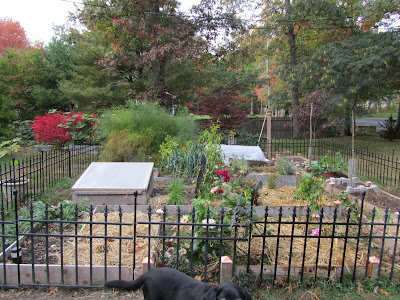 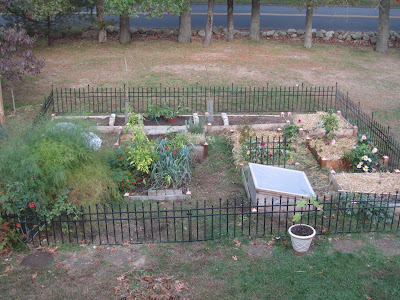 I think the new bed will be 2 feet wide and run horizontally just in front of the current fence line where the potato grow-bags were all summer (see all the round brown patches?), that is likely my best bet for full sun.
***
The citrus trees were moved indoors this week, and the little fig
will be going in the basement for wintering over soon. 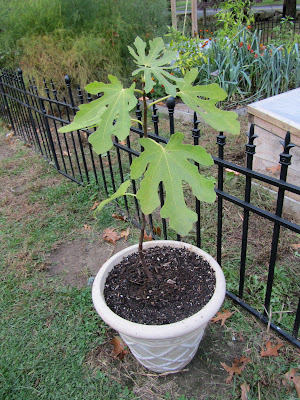 I spotted this stranded bumble on a dahlia while I was photographing the garden earlier, I think the dropping temps had it grounded.  I snipped the flower and the bee is inside in a critter cage to be set free in the morning if it survives the night, it has been moving around since being warmed by the house so our fingers are crossed. 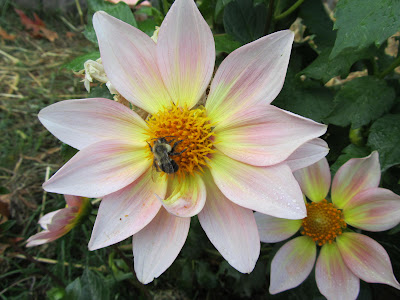 
I am off to peruse the 2011 catalogs (yes, they are arriving already!)- we are going to plant some more fruit between the road and the shed and see what happens, those newly rooted raspberry canes will hopefully survive the winter and go in over there, along with a gooseberry or two, maybe even some more highbush blueberries if I go really nuts!  ;)  We are stretching our options to the limits in order to capture any more square footage with sun, the area behind the shed gets morning light only, but we are hoping it will be enough to produce fruit.
HAPPY GARDENING!
© How My Garden Grows All Rights Reserved; Kelly at 6:54 PM 8 comments:

My apple trees arrived today, and the folks at Big Horse Creek Farm put a smile on my face.  It all started the first week of January when I placed an order for two apple trees.  BHCF will custom grow your variety on your chosen rootstock.  The trees are just about a year old now and are literally sticks.  In the first picture my fingers are on the taller of the two 'sticks'. ( My thumb is on the support stake.)  The second photograph shows the graft site on both trees.   I am very excited to have these babies, and I know with proper care and some luck they will put on beautiful growth come spring. 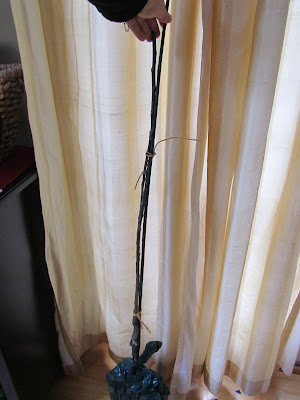 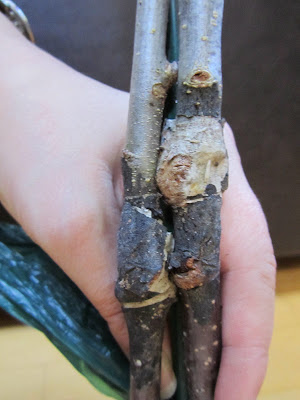 Now I was already thrilled to have my trees arrive, this wait has been close to that of human gestation, lol.  So imagine my joy when I found this along with the 3 pages of care & planting instructions: 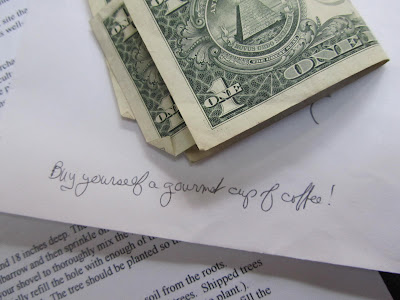 Inside was an envelope with $3.00 tucked in and a note to "buy myself a gourmet cup of coffee"....well Ron & Suzanne- that is exactly what I will do!!  (The refund was given as a result of one of the trees being slightly smaller than their standard.  Now that is great customer care.)

So if anyone reading this is ever having an urge to plant some heirloom apple trees, please don't overlook this little company that truly cares about growing a healthy tree, and treating their customers right.


(P.S.- these trees are Hightop Sweet and Westfield Seek-No-Further, both on dwarf Bud 9 rootstock.)
© How My Garden Grows All Rights Reserved; Kelly at 4:48 PM 6 comments:

Another green tomato recipe, and its a keeper! 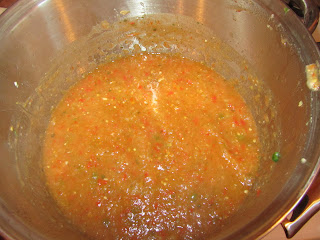 I tried a new recipe today, and I am so glad I did!  The recipe can be found over at Farmgirl Fare, and it is for a sugar-free green tomato relish/salsa/sauce.  I can't stop dipping tortilla chips in the pot.  Do I even bother canning the stuff?  It may not last long enough, lol.  The recipe calls for green tomatoes, but there are also many onions & garlic, some peppers, and a green apple thrown in for good measure.  Erin, this recipe may be perfect for you, especially if you kick-it-up a notch......I halved the cumin and (seeded) jalapenos called for in the original recipe and it still holds a nice little punch.  Now, I must warn you that there is a very distinctive vinegar taste to this sauce, but hubby and I totally approve!  (Edit: Note to self- small dice jalapenos added *after* pureeing, not before)
© How My Garden Grows All Rights Reserved; Kelly at 6:19 PM 8 comments:

The garden season really is coming to an end for me.  Though my tomatoes continue to produce, some of the fruit is diseased as of late so a fair amount of what I pick gets chucked.  Peppers are still coming in, but probably not for long with the continually cool temperatures, and I harvested the first of my leeks today.  (I remembered to take a picture, but only after they had been trimmed and rinsed.)  I think I need to be better at hilling them up, so much of the leek was green, and too little was white.  Maybe I tried 'blanching' them too late in the season? 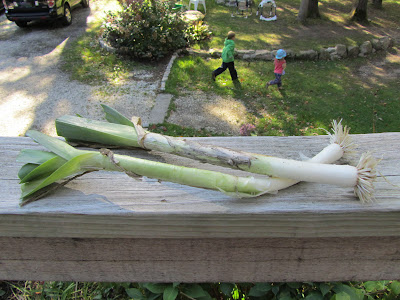 I also made my first batch of pickled jalapenos tonight, I have never had them before but they look so good when others make them.  I am sure they will be enjoyed on nachos all winter long.

The mustard greens and chard are covered in spiders, it really has become quite annoying to pick off so many spiders in order to have a salad.  Icky.  Icky as in the eight I flicked, shook off, and rescued from a sure drowning death during the harvest, sorting, and soaking of the salad I made today.  Icky.

That about sums it all up on my end, I have been way too busy, and miss keeping up with everyone's garden happenings.  I hope to catch up with what you all have been doing later on this week, and I hope you are enjoying the new season and all that it brings.  Happy Gardening!
© How My Garden Grows All Rights Reserved; Kelly at 8:20 PM 8 comments:

TIME TO PLANT THE GAH-LIC

(This psot was written days ago, but I just never got around to publishing it.)

Yup, it is October, and it is getting cold.  Time to get those cloves in the ground.  Last week I gave the potato onions a home, this week it is garlic's turn.  I had read a very informative piece over at Daphne's Dandelions a few days ago, and I think I will try one of her methods which involves peeling and soaking your cloves before planting them out.  Daphne claims great success with this method, so now I just need to go check the proof on my bottle of vodka and decide which cloves will the best for seed.  The trouble is that a large head of garlic doesn't always mean large cloves are inside, in fact many of my small heads have few, but large cloves.   From what I understand, the larger the clove the better when it comes to next year's crop.

I ordered some hardneck garlic (German Extra Hardy), and will also be planting 3 other varieties that were harvested from the garden this year (a mystery farmer's market variety, Chet's Italian Red, and Inchelium Red- both softnecks).

**UPDATE**   I did in fact soak the cloves in a baking soda mixture w/ some minerals and seaweed, but only for a couple of hours as the rain was coming.  They were quickly peeled, then rinsed and soaked in rubbing alcohol for about a minute, rinsed again, and then run out into the garden.  I had a friend over so I didn't pause to take pictures as I already felt a bit rude for peeling and planting garlic while she was here, but what else is there to do when 3 or 4 solid days of rain are coming?

These are all the discarded cloves.  Some of these just may be bruised, but I do not have enough experience to differentiate between fungus, nematode entry hole, or "just a pimpled//discolored/brown spot" so aired on the side of caution.....but look at all these cloves- maybe I should cook them up?  I hate to just toss them in the garbage.  Thanks to all the discarded cloves I am shy of filling two 4 x 4 beds as I had intended.  Maybe I will just raid my stash and plant some more out once the rain stops. 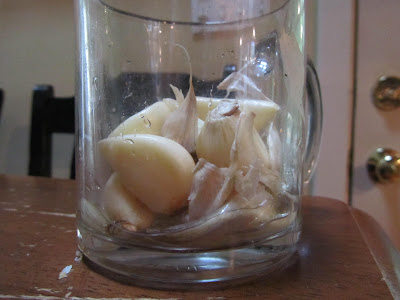 HAPPY GARDENING!
© How My Garden Grows All Rights Reserved; Kelly at 8:55 AM 9 comments:

SEARCH HERE! Results From this Blog, Or the Web. 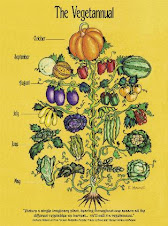